Gal was born and raised in Tel Aviv. He holds a bachelor's degree in Middle East History and Political Science, and a Master's in Modern Middle East Studies from Tel Aviv University. He started sharing his love for Israel when he was a tour guide at The Jewish People Museum, a History teacher in an afterschool program, and a Camp Counselor in the US. He continues to use this passion as a MITF coordinator where he has now worked for 3 years in Bat Yam. Bat Yam is a very special place for Gal because it is where most of his family lives. In his free time, you probably see him watching Maccabi Tel Aviv soccer matches or eating hummus. 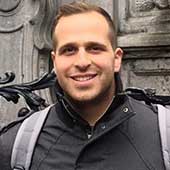 Maor was born and raised in Haifa, Israel. He holds a bachelor's degree in Political Science and Communications from Tel Aviv University and a Master's in Political Marketing from the Interdisciplinary Center (IDC). Before heading MITF at Israel Experience, he worked on our Onward programs and used to be a media consultant and spokesperson for Israeli politicians. During his student years, Maor worked as a flight attendant, so he has been spreading good Israeli vibes all over the world and he can ask “Chicken or Beef?” in more than 6 languages. Maor loves to watch movies, go to the theater, listen to live music and travel. 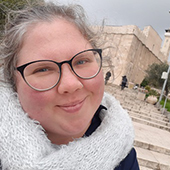 Maayan Belding was born and raised in upstate New York and moved to Israel to participate in MITF in 2016. She has a degree in Middle East Studies from Yale University and is studying for her Masters in Jewish Studies at the Schechter Institutes in Jerusalem. Before coming to Israel, she taught English as a Foreign Language to recent immigrants in a high school outside Boston. She is now a certified elementary English teacher in Israel. She began working for Israel Experience in 2017 as an internship coordinator for Onward Israel and is excited to help the next cohort of young Jews navigate their year of service and personal growth on MITF.

Jordan is a proud Texan at heart who spent her college years in Chicago. Jordan dreamed of being an occupational therapist but quickly realized her passion lies in helping Jews around the world connect to Israel. During college, Jordan worked for Shorashim doing recruitment and registration for Birthright Israel. After deciding to defer grad school she came to Israel for 10 months as a Masa Israel Teaching Fellow (MITF). As a Teaching Fellow, Jordan learned many things about herself (personally & professionally), Israel, Judaism, and how all of these can play a role in her life together. 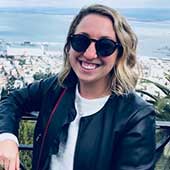 Blaire is proudly from New Jersey and now lives in Tel Aviv. She went to American University in Washington DC and taught elementary school for 4 years before coming on Career Israel. Blaire interned in the fundraising department of WIZO (Women’s International Zionist Organization) and loved giving back to Israeli children and families. Blaire started at Israel Experience by working with Onward Chicago as an internship coordinator and now serves as the Director of Recruitment, overseeing Career Israel, Israel by Design and Masa Israel Teaching Fellows. Her goal is to help young people create a stronger bond with Israel while having the adventure of a lifetime!

You do not want to miss out on this one of a kind Chanukah party brought to you by Masa Israel Journey!! Celebrate chanukah with Masa alumni and participants from around the world, oh and Static & Ben-El (no big deal!!!!) ... See MoreSee Less

“This week in school we taught about thanksgiving. The kids learned the word thankful and then finished the sentence “I am thankful for...”. Some were thankful for their Xbox while others said their friends family and health. It was a very meaningful week and a great way to get to know our students on a deeper level. Happy thanksgiving 🍂🍁🦃🍽”-Hannah Bartell, MITF Bat Yam Fellow Israel Experience מסע - Masa Israel Journey ... See MoreSee Less

We use cookies to ensure that we give you the best experience on our website. If you continue to use this site we will assume that you are happy with it.Ok