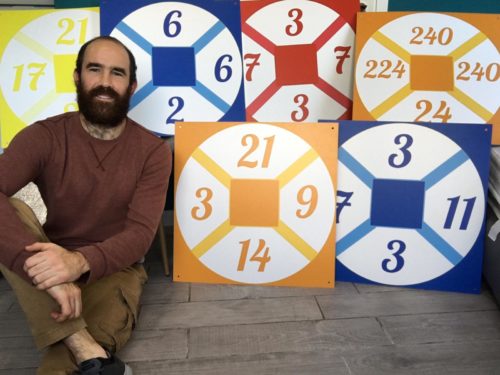 When Benjamin Cohen, 31, of Virginia entered the JSWIPE dating app about a year ago, he was looking for love, but fate had something else in mind, he found himself swiping right to an advertisement about an educational volunteering program in Israel. "The fun thing about ads is that they always like you back," he says with a laugh, "it's one of the only matches I got from this app, so I went with it and came to Israel to teach English and math and really fell in love with the country."

Cohen has been in Israel for several months teaching kids English at the Romema school in Haifa through the MITF (Masa Israel Teaching Fellows) program. The program hosts about 90 participants a year who volunteer as teachers and teaching assistants in different schools in Israel. The program is run by Israel Experience and is fully funded (3 nis million a year) by Masa - a joint venture between the Jewish Agency and the Israeli government, which underlies all the long-term educational programs of Diaspora Jews visiting Israel.

But this is not enough for Cohen, he wants to pass his love for mathematics and teaching to the next generation. To that end, he joined an accelerator program run by Israel Experience in collaboration with the communities in which they live to initiate social initiatives and engagement in the communities they live in.

Cohen decided to submit a proposal related to one of his passions - math - he approached the program with the idea of ​​setting up a math puzzle garden in the schoolyard. Math is a subject that some kids find challenging but can be made accessible through games. "Through the games, they can practice various topics, such as the multiplication table or fractions, while in recess. It is not intended to replace standard lessons in the classroom, but the goal is to get them to look at the topic as something fun - mixing fun and math. I see how the kids get excited when I teach them math with card games, so it's clear to me that they will be excited about all kinds of board games and other activities and projects I will hang on the walls in the yard," says Cohen.

For the construction of the garden, Cohen received 3,500 nis ($1,000), an amount that should cover the construction costs of the project. "If I need more funding I can always approach the Science Museum, the Ministry of Education or other NGOs in the field of education. I'm also willing to pay for it myself," Cohen said." I'm thinking of staying in Israel after July (after the volunteering program ends) to spread the word to any educational organization interested in teaching math in a different, more interactive way. I want them to see the results of this project and maybe even help open new ones,” he added.

Cohen's vision competed against dozens of other proposals that sought to have a positive impact on the community. All competitors were competing for a part of the 30,000 NIS prize. “We chose the ventures we thought would have the most influence on the community, and that the next generation of MITF volunteers will be able to continue these projects even after project initiator leaves," said Maor Lotan, the MITF Israel Experience Program Manager. 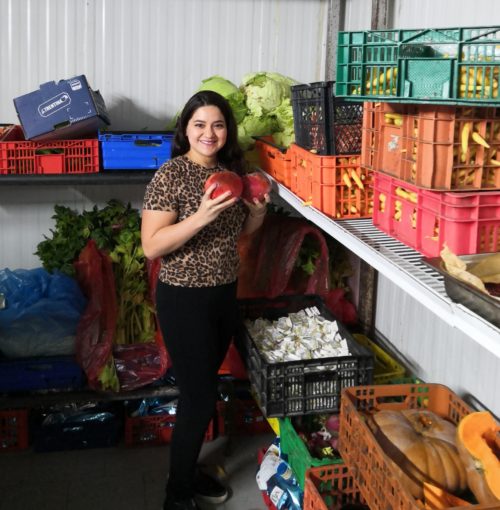 From PR to Food Rescue

May Hauer Simmonds, 28, from Ecuador, came to MITF after working in Public Relations in New York. "I came to Israel for the first time seven years ago through Taglit and fell in love since then I wanted to come back. When I heard about the Masa programs I was in between jobs and realized that it was now or never, so I went for it."

Hauer Simmonds volunteers as an English teacher at Neot Peres School in Haifa and is also active in the prevention of throwing food away, volunteering at the Robin Food restaurant in Haifa, which serves food to those in need. Her idea - that also won a grant - seeks to place a communal refrigerator in Haifa and will be stocked with fruits and vegetables donated by local businesses. Similar to ones that already exist in Tel Aviv and Be'er Sheva initiated by Omer Ronen. The communal will be available to people in need. This not only helps the needy but also avoids the waste of food.

"I hope it will work in Haifa as well as it does in Tel Aviv. We are supposed to get our first refrigerator in another two weeks and then we will start advertising on social media and any other way we can, "says Hauer Simmonds, "Businesses that donate fruits and vegetables they intend to throw away will receive a sticker indicating their contribution. We believe this will encourage the public to frequent these places because the business contributes to the community. "

Olga Shokurova, 23, born in Ukraine and grew up in the US, also decided to get involved in providing food to the needy as part of the accelerator. Like many others, Shokurova fell in love with Israel on her Birthright journey. After completing her bachelor's degree in psychology she decided not to look for work in her field, but rather volunteer in Israel as an MITF teacher. "I teach in a primary school in Kiryat Eliezer in Haifa and noticed that quite a few children do not bring lunch from home and don’t eat anything until 2:30 pm. It was clear to me that this affects their concentration level and their academic achievements. "

Shokurova's venture aspires to connect the school with restaurants and cafes in the city that will provide sandwiches for 40 children who come to school without a meal. "We have already recruited a bakery that will provide bread and pastries, we are trying to find a hummus place who can provide hummus, and are also looking to find a restaurant that will help with cheeses for the sandwiches. We will try to make it as healthy as possible, "Shokurova says." In addition to that, we plan to plant a communal garden with the kids in the schoolyard and grow vegetables. This will not only empower them but also provide them with quality food."

Amos Hermon, CEO of Israel Experience, said that “the MITF program connects native English-speakers to young Israeli students in a very short period of time. The teaching fellows become an integral part of the community in the cities they volunteer in. The proof of this is the accelerator program which allows young MITF participants to understand their vision of improving the community they live in during the time they are in Israel. I urge the Education Ministry to double or triple the budget for this program. The results are priceless.

Read the original article in Hebrew

MITF with Israel Experience brings about 90 young native English speaking Jewish adults annually to Israel to volunteer and teach in schools. Some of the volunteers choose to create social endeavors that have positive effects on the communities they live in.
Share this...

Lockdown is over and with museums back open, the group at Israel Experience visited Na'laga'at in Jaffa. It is a one of a kind non-profit arts and cultural center that represents a meeting place between deaf, blind and deaf-blind individuals together with the public. Mallory Goldenberg “it was very educational, informative great to learn that sign language was influence by culture”.Lindsey Levy Mitf - MITF Rishon LeZion - “Visiting the deaf exhibit in Jaffa was one of my favorite activities we’ve done so far this year! It was incredibly informative and inspirational to learn about the deaf community in Israel, as well as the challenges deaf individuals across the world face as a result of COVID and the necessary face masks”.Bea Herzberg, MITF Rishon LeZion - “It is crucial as teachers, and generally, as caring humans, that we take the first steps to understand what life is like for others and how we can best support one another through action and awareness”. ... #teachlivelearn #community #volunteer #travel #israel #mymasa #teachabroad #teacher #opportunity #inspire #future #happy #learn #selfdevelopment Masa Journey ... See MoreSee Less

Meet the MITF Fellows (2020/2021)Basha Rubinstein – Rishon LeZion 🇺🇸 🇮🇱 Originally from Dallas, Texas, upon graduating in 2020, Basha decided to embark on a journey to Israel for 10 months. With a love for Israel growing up, Basha, who holds journalism degree from the University of North Texas, thought she would step outside her comfort zone and spend 10 months teaching English in Israel during the pandemic. She says she never planned on being a teacher, “but nothing compares to walking into a classroom of 18 kids and they all call out your name and run toward you” It’s clear Basha has had significant and positive impacts on her students in the 6 months in Israel thus far (despite spending most of the time teaching via distance education). Despite experiencing three lockdowns, Basha’s year has been very special and has developed great friendships with her Rishon LeZion cohort and her roommates. “When I arrived to the apartment and started the Bidud (quarantine), I didn’t really have any expectations and I came with an open mind. But the 5 of us had the best time of our lives in bidud, and we bonded so deeply—we have been literally inseparable since the day we landed in Israel 5 months ago”.In between school and programming, since the recent lockdown has come to an end Basha likes to go on picnics and explore the beauty of Israel. Together with her roommates they like to go to the park and meet Israelis and says its one of the best ways to socialize during corona time. Basha also has a passion for cooking and growing plants and has had great success so far with tomatoes and trying lots of new recipes!Basha has always had a close affinity with Israel, its people and culture and has a dream to make Aliyah one day. She is a clear example of someone who is open minded and making the most of her Israel journey. As a well-respected member of the MITF program the Israel Experience family would like to say KOL HAKAVOD for your efforts as a valuable member of our program! Toda Raba תודה רבה 🙏...#purim🎭 #teachlivelearn #community #volunteer #travel #israel #mymasa #teachabroad #teacher #opportunity #inspire #future #happy #learn #selfdevelopment MasaIsrael Israel Experience ... See MoreSee Less

‘The power of giving’ - Honouring the medical staff at Ram Bam Hospital, HaifaAs Purim approaches the entire Haifa MITF group of fellows took the time to stop, appreciate and prepare something special for the medical team at Ram Bam hospital who work tirelessly day in day out (especially throughout the pandemic). The doctors rotate in the Corona ward and work very long hours to keep patients healthy! In the spirit of Purim the MITF Haifa fellows all collaborated to put together a beautiful assortment of Mishloach Manot. Medical staff at Ram Ram are pictured holding a sign saying ‘toda’ (meaning thank you in Hebrew). Israel Experience has a close affinity with Ram Bam hospital, where we also have a successful doctor training program for many years. (MITF Haifa Fellows - Pictured from left to right: Lena Novins-Montague, Isabelle Rogers & Madeline Frank)“I am so grateful for our health care workers and Haifa community! – Lena Novins-Montague"I am so happy that we could show our appreciation to the hard working medical staff at Ram Bam!" – Madeline Frank...Disclaimer: All three participants pictured have been vaccinated against COVID-19 and are part of a nuclear family ...#purim🎭 #teachlivelearn #haifa #haifacity #community #volunteer #travel #israel #mymasa #teachabroad #teacher #opportunity #inspire #future #happy #learn #selfdevelopment @gal.benarosh @masaisrael @mitf_masafellows ... See MoreSee Less